As a merchant, you may be wondering: Is it worth it to dispute a chargeback? On one hand, if you prevail in a chargeback dispute, you can rescue revenue that otherwise would be lost. On the other hand, there are several reasons not to dispute chargebacks.

The best decision? Learn as much as you can about the chargeback process. By understanding how it works, you’ll be better positioned to determine when it makes sense to dispute chargebacks—and when it doesn’t.

Here are eight common questions merchants have about the chargeback process, along with the answers:

1. What are the most common reasons customers dispute credit card charges?

Cardholders dispute charges for a range of reasons. According to a recent Ethoca and Aite Group research report, some of the top reasons for credit card charge disputes are:

2. How does a merchant dispute a chargeback?

Typically, the acquirer will notify the merchant that a customer has disputed a charge and requested a refund. To challenge a chargeback, the merchant must provide “compelling evidence” that shows the customer’s dispute is unwarranted.

Note: An acquirer is the financial institution that processes credit and debit card transactions on behalf of a merchant.

The evidence should directly address the chargeback reason code—a number and brief description provided by the card network that explains the reason for the customer’s dispute.

If card-not-present (CNP) or No Cardholder Authorization fraud is listed as the reason, for example, the merchant can submit the IP address of the device the purchase was made on.

Depending on the code, evidence could also include receipts, proof of delivery or card verification value (CVV) matches. These must be submitted by the deadline provided by the acquirer.

Additionally, the merchant typically provides a written chargeback rebuttal letter that explains how the evidence provided shows the chargeback to be invalid.

Here’s a sample of what a chargeback rebuttal letter looks like: 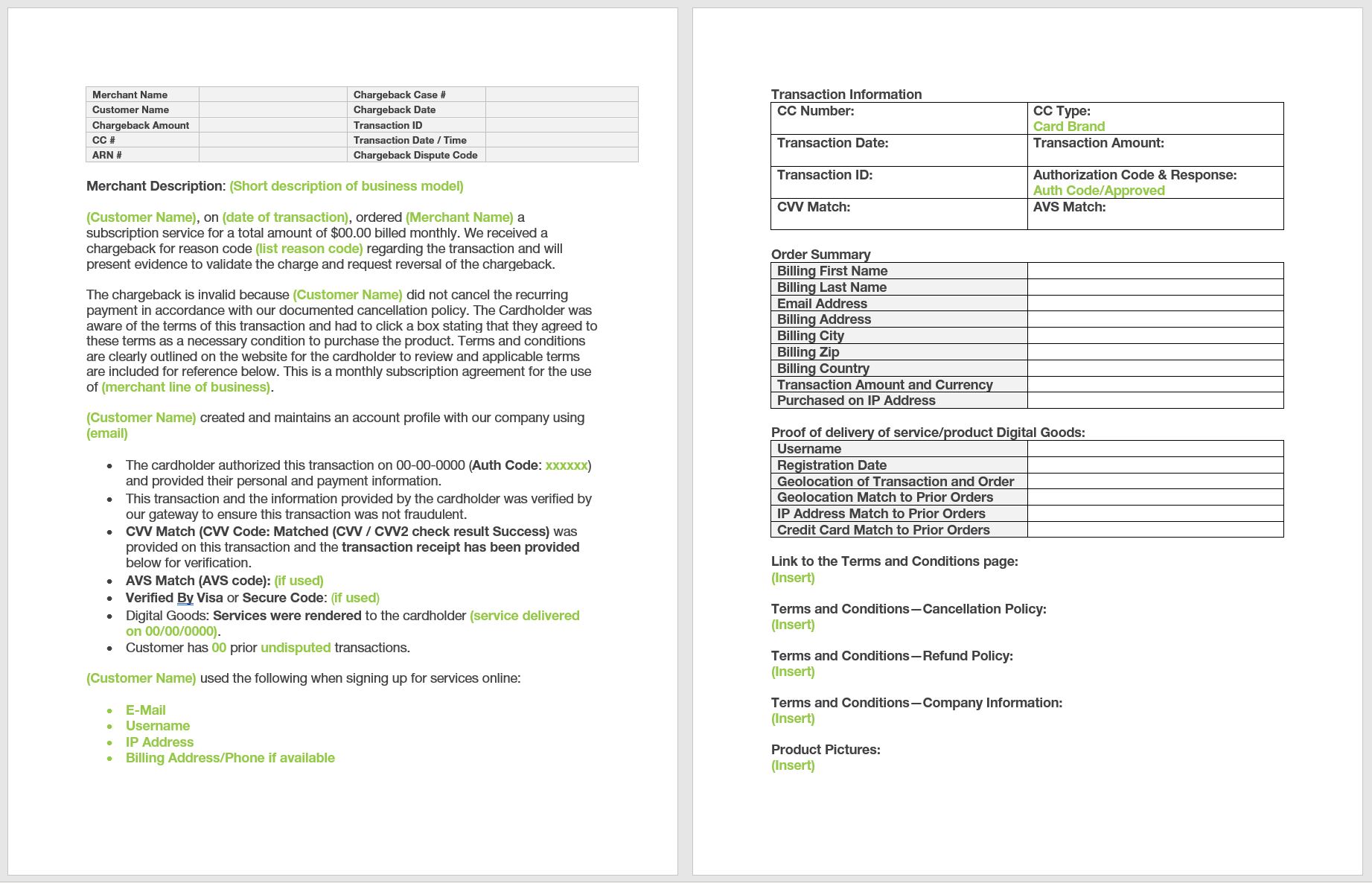 3. How long does the chargeback dispute process take?

The full chargeback process can take up to 120 days. However, the merchant’s involvement generally takes less than a month. That’s because acquirers will typically give merchants less than 30 days to respond and provide compelling evidence.

4. Is it even worth it for a merchant to dispute a chargeback?

5. What are the drawbacks to disputing a chargeback?

Given the time and resources involved in pulling together an effective chargeback dispute, the true cost may not be worth the potential saved transaction value. For example, if a customer disputes a $20 charge, is it worth spending hours pulling together compelling evidence and a rebuttal letter to counter the chargeback?

Moreover, a merchant will want to consider the customer relationship. If a long-time customer disputes a charge, denying them that chargeback may negatively impact the relationship. That relationship—and the potential future revenue it could generate—may be worth more than the benefit of a chargeback reversal.

6. What are the odds a merchant will “win” the chargeback dispute?

The true odds depend on the strength of the compelling evidence and the chargeback reason code itself. But research by Javelin found that merchants dispute 43% of all chargebacks and succeed at 60% of those disputes. That suggests that in the times when merchants are compelled to file a dispute, most of the time they will prevail.

7. Does a merchant pay a chargeback fee if they win a disputed chargeback?

Yes, the merchant generally pays a chargeback fee regardless of the outcome. Chargeback fees typically range anywhere from $20 to $100—or even more in some cases.

8. Will the merchant’s chargeback ratio improve if they win disputed chargeback?

No. The chargeback ratio—a number used by card networks to assess a merchant’s riskiness—is negatively impacted by all chargebacks regardless if they are successfully disputed or not. A high chargeback ratio can lead to higher card-processing fees or even loss of card-processing rights for that merchant. That’s just one reason it’s so important to work to avoid chargebacks instead of disputing them after they happen.

Preventing chargebacks before they happen

While there’s no one right answer to whether a business should or shouldn’t dispute a chargeback, one point holds true: Too many chargebacks will negatively impact your business.

Whether you’re concerned about the cost, your overall volume of chargebacks or your customer experience, the simplest solution is using collaborative tools to prevent chargebacks entirely. By stopping them before they happen, you can reduce the time and financial toll chargebacks take on your business.